Perhaps with how far we've come in understanding Paralogos, one of their most mysterious qualities we have yet to dive into are the mysterious lights consistent on all Paralogos bodies. They relate directly to their existence, seemingly their essence and energy- this Chapter will delve into this topic.
We will also discuss how a Paralogos' wisdom affects these qualities and therefore then also the Paralogos' innate magical abilities.

At the end of this piece we have additional information catalogued more as a point of general interest for this topic. 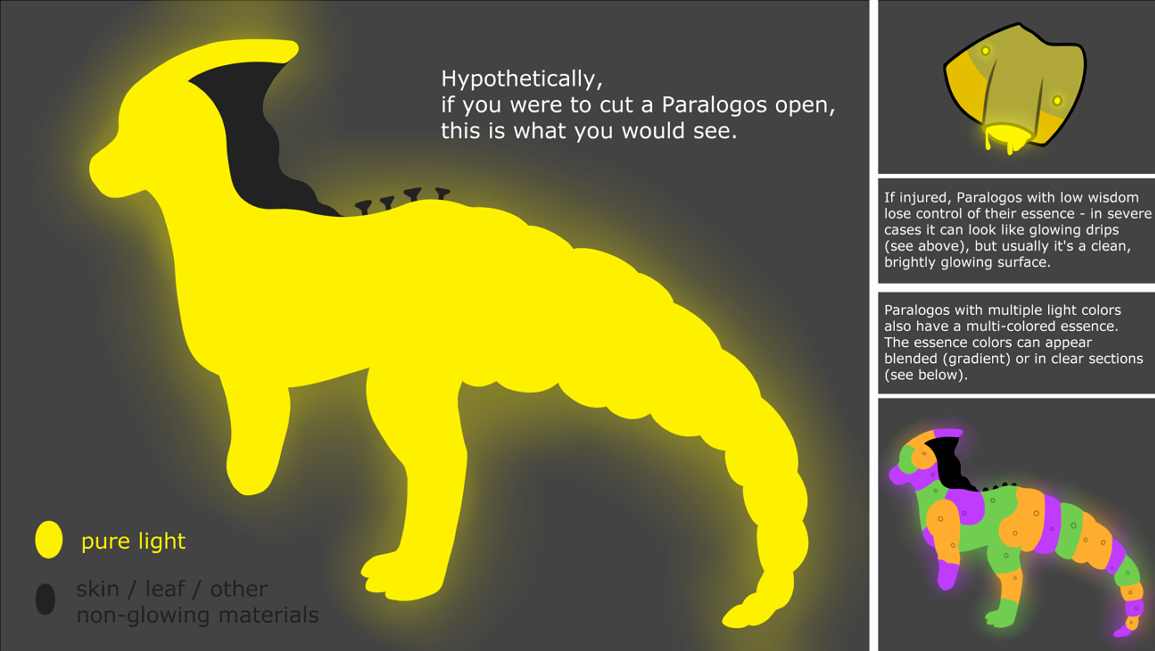 On The General Importance of "Lights"

A reminder then that Paralogos are illusory creatures by nature-- while their physical bodies very much do have a weight and ability to affect the world around themselves, they do not sustain themselves in the same ways as other physical beings. Their physical appearances are very much still illusions cast onto themselves using their magical abilities. This is also why they are sometimes seen to change in appearance over time as their understanding of their word focus changes.

Something that does not change in presence are the "windows", the lights that can be seen flanking the sides of these creatures.
These are indeed windows into their very essence, light captured into a physical body.
We would prefer another term instead of lights, but colloquially this is the easiest way to understand them.

Regardless, Paralogos utilize the light they can release to use magic. Something like release valves, they let some of their essence pour out to affect the world via these ports. This is why higher levels of magic are so strenuous-- they require a more controlled release and timing to affect greater and greater illusions onto the world around them.

A basic low level of magic use is required after all to keep up the physicality of their normal day to day forms. It is something like a crystallization of their essence that gives them weight, and let's them act as something more than a hologram.

This essence can be restored via time spent with their word focus, reading in general, or being around books themselves (crafted of the natural materials Lingua prizes so highly, I.E. ink) to name a few methods.

On this note, it is important to refer then to Chapter 5 - Paralogos Life Cycle, as now there lies something that can cause death for a Paralogos. As we've also discussed in Chapter 3 - Magic & Chapter 6 - Wisdom, the higher tier of Magic, the higher a chance to injury and death for the Paralogos in question. Wisdom can soothe this and remedy it to a degree, which we will also discuss more in depth below.

But as to why Magic can cause injury or loss of the Paralogos, it is as simple as this-- they lose all their "light".
Magic by its function necessitates release of their essence in a controlled fashion, as to not lose one's physical form.
After all, Paralogos are essentially this essence, this light, crystallized from human language into a physical presence.

This physical body would fade without anything inside it- without that essence captured to keep it going.
So that is one way a Paralogos might die, or fade.

The other main case, as previously described, involves the "loss" of a word from the human mind- a loss of strength given to it, power in its usage.
In this case, a similar fading happens-- the belief giving the Paralogos presence also fading and turning dark.
There is a direct relation to human use of a word and that Paralogos which encompasses that term with its entire sense of self-- their amount of essence, the strength of their inner light, relates to that.

Finally, the third case involves Physical Injuries.
However, this mainly only affects those with lower wisdom, and only in severe cases- so it is not often seen.

If the outer illusion layer of a Paralogos gets injured, their level of wisdom determines how much they will suffer from that injury.
A Paralogos with lower wisdom will most likely lose control of their essence/light in that particular spot and suffer from medium to high levels of exhaustion.

This is also dependent on the size of the injury. This exhaustion will feel the same as casting magic would, just without any magical effects taking place.
The open surface will simply glow very brightly - much more brightly than their regular lights, since those are under control and the injury is not.
The Paralogos in question will need a good amount of time and focus to seal the injured spot shut.

Meanwhile, a Paralogos with the highest tier of wisdom might not even notice something has injured them at all.
Most of their injuries will immediately seal back up, without much essence expenditure required. Only significantly large injuries (f.e. being cut in half) would require them a similar amount of time and effort to seal then what a Tier 0 Paralogos would need for a medium-to-large cut.

A Paralogos with Tier 6 Wisdom cannot be destroyed by any physical means.
They are perfectly aware of the fact that their appearance on Lingua is purely illusory and thus can re-materialize if absolutely necessary; though a full re-materialization would put extreme strain on even the wisest Paralogos and should only ever be attempted with fully stored essence.

Since storing essence while dematerialized is very difficult, such a process might take months or even years.

Wisdom, Magic, and The Body

To return to mention of a way to avoid a dark fate when overcasting magic... Wisdom is the way a Paralogos can work around some constraints.
Level 6 Magic- Transformation Magic, is so very dangerous as it requires an overhaul of the self form in that moment. It requires much essence, much light, to be used up.

When a Paralogos comes to know themselves via building up their Wisdom, this strain is eased. They know themselves well enough to feel more comfortable shifting their form, and they begin to know exactly how much essence, how much light, they have available within themselves to affect the world around them.

Essentially, they begin to be able to so perfectly release light in a controlled fashion that expending it all are once no longer becomes an ever present fear. They also, particularly in the case of Tier 6 Magic, do not fear losing their normal sense of self permanently, never being able to change back...

And this is why Wisdom is so critical to develop alongside a young Paralogos' understanding of their own Magic.

To give some examples of how Wisdom can augment an existing Magical skill, let us discuss below a few cases.

Tier 5 Magic relates to casting illusions of beings- created from nothing, or it can instead be effectual magic on the world for revival of beings no long with us, just for a time. Particularly for the first branch of this, a higher wisdom tier (4->Onward) can allow for the senses to be extended in these created beings. After all, they are simply extensions of the Paralogos themselves, out in the world away from their main body for a time.

Tier's 2, 3, and 4 of Magic can be very specific for a "species word" focused Paralogos. After all, that is but one creature amongst a family of many others. But through utilizing a combination of Magic and Wisdom, they can begin to help or affect those of that creature's genetic family. After all, they are mostly made up of the same coding- which a Paralogos who knows that in and out should be able to affect.

Tier 1 of Magic can present in many ways, perhaps an aura, a scent, a curious part of the anatomy. In the case of something like a feeling or emotion projected onto others, a Wise Paralogos would then know how to extend that out more effectively to those around themselves.

These are just case examples of specific Magical Abilities, but we have generalized observations discussed in Chapter 6 - Wisdom as well.
Below this section is further information, more about the general appearance of a Paralogos' lights.

Turning Lights "On" and "Off"

Paralogos' "lights" can most accurately be envisioned as transparent patches on their illusory skin.
While their default state is glowing bright, Paralogos have the ability to put the lights "off".
While their essence of course continues to glow, they can put a semi-opaque layer of skin over their lights to dull them.
This might be done to conserve energy in dire situations or to be less visible.

However it should be noted here that prolonged dulling is not recommended - it would be comparable to a human holding their breath for too long.
A certain amount of glow is required to keep a Paralogos' body illusion up, after all.

If a Paralogos were to force themselves to keep their lights dull for too long, their survival instinct might force new lights/glowing patches to appear.
This is especially prevalent on low-wisdom Paralogos and gets more manageable and controllable as they progress in their wisdom studies.

Paralogos' essence usually comes in a single color, but can rarely be multi-colored as well.
This discovery caused discourse in certain Paralogos-interested human communities.

From a scientific standpoint both of these factions are factually wrong, since no proof for any sort of differences in abilities or difficulties could be found through numerous and thorough studies.

The existence of this discourse shall only be mentioned here for posterity.
Studies continue on how the light inside of Paralogos affects their existence- but we've tried to explore as many aspects as we could in this Chapter.