Paralogos, as creatures themselves, are the most complex form of life - on our world at least.
We -as simple human beings- do not know much about them. In fact, we know much less about them than they know about us!

The only thing we understand for certain is that individuals seem to "claim" exactly one term, which guides their development, both externally and internally.
These terms seem to be not limited to any one certain language.
There is reason to believe that before that point, these creatures can be called tabula rasa, blank slates.
This shall be our starting point from which we'll start to explore and understand the Paralogos in their entirety, if our work is done well.

Perhaps the best way to attempt this project is to attempt to categorize the many forms these creatures seem to display.
As their most unique feature is their chosen word, we've decided to classify them through considering the respective "concreteness" of the term.
The highest levels of this system relate to what we would call "abstract" terms.
We've divided them into six groups, which we shall call "levels".

Level 2 - Alive but without Intellect
This level encloses all kinds of plants or organisms who are neither considered objects nor animals.
Put another way- is that these words tend to be based on living things lacking a full form of sentience, the ability to feel, perceive, or experience. This category also tends to involve "complete" organisms, not things like blood cells or other "parts" of something larger.
F.e.: Ginkgo, Paprika, Yeast

Level 3 - Alive with Intellect
This level encloses every word that describes a living being which possesses a form of sentience. This includes both animals and humans.
There is no delineation between levels of sentience or sapience with this category. (Sapience relating more to a kind of wisdom, or ability to act.)
"Human" words can be sometimes considered "jobs", such as the word "thief".
F.e.: Reindeer, Pegasus, Vampire

Level 4 - Actions & States of Being
This level encloses words which describe how, when, or what to do or be - meaning all verbs and adjectives are part of this level.
Paralogos which center themselves around terms such as this may also find themselves drawn to the related action, skill or state.
F.e.: Hiking, Small, Happy

Level 5 - Experienceable but not Palpable
This level encloses terms describing impressions and events, as well as anything non-palpable which does not fit into any other level.
Palpability simply relates to the ability to "touch" something, or be able to grasp it. Effectively, anything abstract is not palpable.
F.e.: Thunderstorm, Silence, Halloween

Level 6 - Concept of Mind
This level encloses terms which are only the results of thought and/or only exist as a result of human creation, or imagination.
This includes feelings, morals, phobias and mental states as well as ways of thinking.
While these words tend to be common in daily speech-- these Paralogos are supposedly the hardest to take shape.
They may also seem to sometimes be in a state of flux, or change. This is the highest level of abstract concepts.
F.e.: Nytophilia, Justice, Happiness

(To find out the level of a word, feel free to submit a question to the Ask Questions Here prompt.)

This is a more explanatory system than the generalized two categories of concrete and abstract terms.
You can think of the levels 3 and 4 being the middle point where words shift from concrete terms to more abstract ones.
Concrete Paralogos will indeed find themselves belonging to levels 1 to 3, while abstract Paralogos belong to level 4 to 6.

Moving forward in our discussions, this basic system of levels will aid us in future chapters of understanding these creatures. 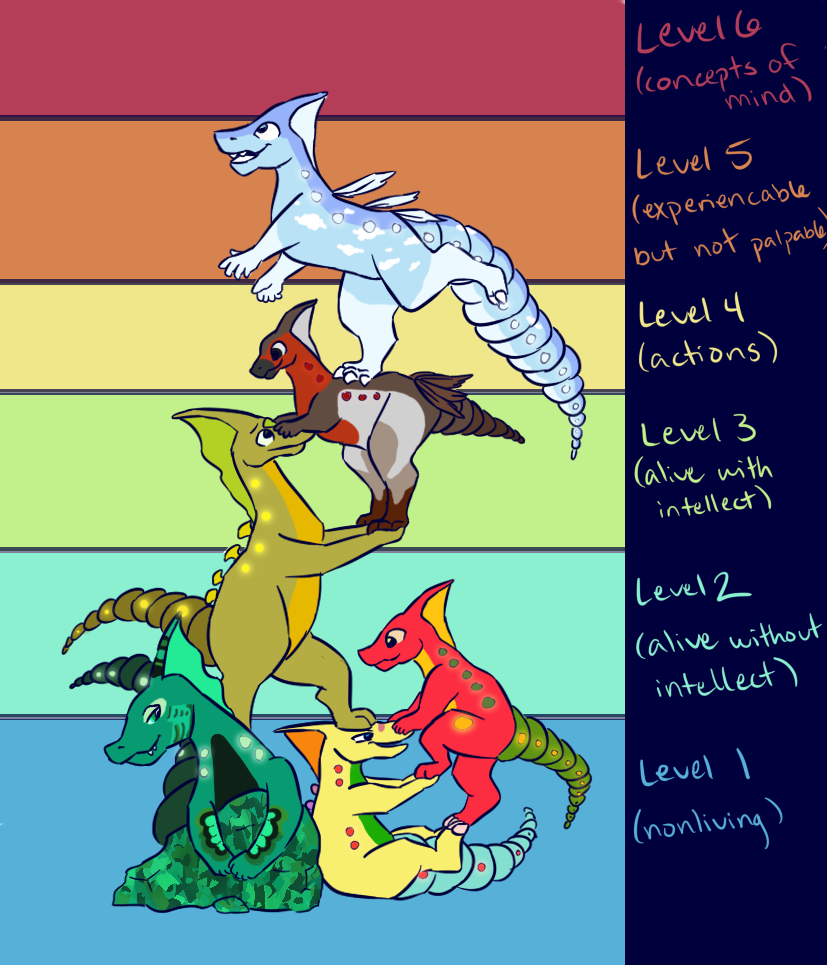