Every Whiffling has a scent and an Animal Influence.
Their Animal Influence defines their physical features (f.e. head shape, ears, tail, etc.).
Their scent defines their design [Please see a list of generally "not allowed" themes on the Paralogos Design Guide].
(f.e. a "rose" Whiffling might have rose petals on their body and rose-colored markings)

There are additional traits that can only be added via special items and/or subtypes (see "Traits / Subtypes" tab).

Whifflings can have Pets (similar to Paralogos' Companions) which come with a WIP magic feature.
For now, please refer to the Companion Annex for Pet MYO design guidelines.

1) Needs decorations and colors/patterns themed around their scent.

2) Needs to have one of the allowed head shapes (see "Heads" tab) with a rabbit-style nose.

4) Fur "skirts" around their hips and fluff around their face as well as head hair is strongly recommended but not required.

5) A Whiffling's Scent Influence needs to either have indirect themeing (colors or general style that make the influence clear), AND/OR approximately 25% or more of that scent influence directly on the body (incl. body parts like tails, skirts, hair, etc. that are made to look like the scent).
Essentially, if you can remove a few flowers (for example) and you don't get the context that it is a floral scented Whiffling, that's too little.

2) Design elements that imply a different scent and/or Animal Influence.
(f.e. a cat tail on a rabbit Whiffling or flower petals on a food Whiffling)

3) Any crown, tiara or similar accessory.
(The only exceptions are crowns made out of natural materials like flowers or leaves.)

4) Human animal influences or pets.
(Whiffling pets cannot look like non-mythical creature humans- this just isn’t something we want for the species. In regard to Animal Influences on the species itself, things like mermaids and centaurs are not allowed even, due to the fact that it would disturb the overall anatomy of the species and it is also not allowed for Maverick Whifflings.)

Most Whifflings will have the standard “paw” hands and “paw” feet barring animal exclusive traits such as hooves on the feet (cows, deer, etc) and wing arms (birds, bats, etc). The paw hands and feet examples are simply the standards for the species.

Generally Whifflings do have head hair and “skirts” of fur around their hips as well, but these are NOT required traits. Just very common for the species and help identify them as a Whiffling! Their bodies will be decorated with designs reminiscent of their scent, flowers, etc- whatever that scent is!

The head is the most identifiable area of the Whiffling, with the big eyes and nose style characteristic of the species. But most of the body (other than the general anthropomorphic form) is going to be determined by the Animal Influence. 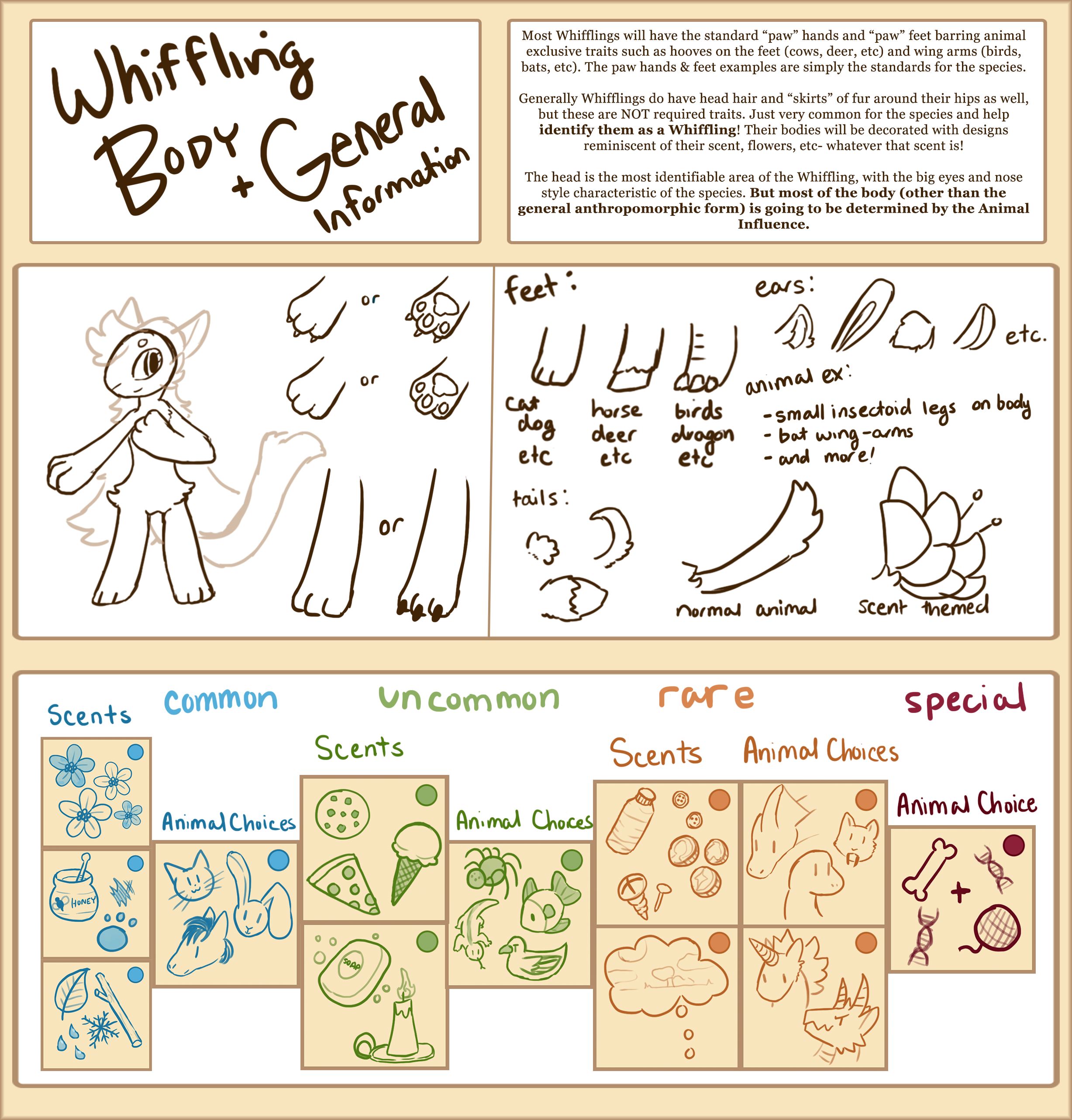 Mammalian Whifflings (1) tend to have the normal face and ears, with not too much added differently.

Reptilian Whifflings (2), for example snake or lizard- will have scaling along with the normal nose (but no ears if desired).

Bird Whifflings (4) are the only ones to have modification to the nose shape with the beaks, but still need nostrils. No visible ear needed there either.

Fish/Aquatic Whifflings (5) will still need a nose (they must have the capacity for smell) but will have gills in most cases.

Insectoid Whifflings (6) still also need the ‘normal’ nose, but no ear. May have some small mandibles or antennae without additional traits needed. 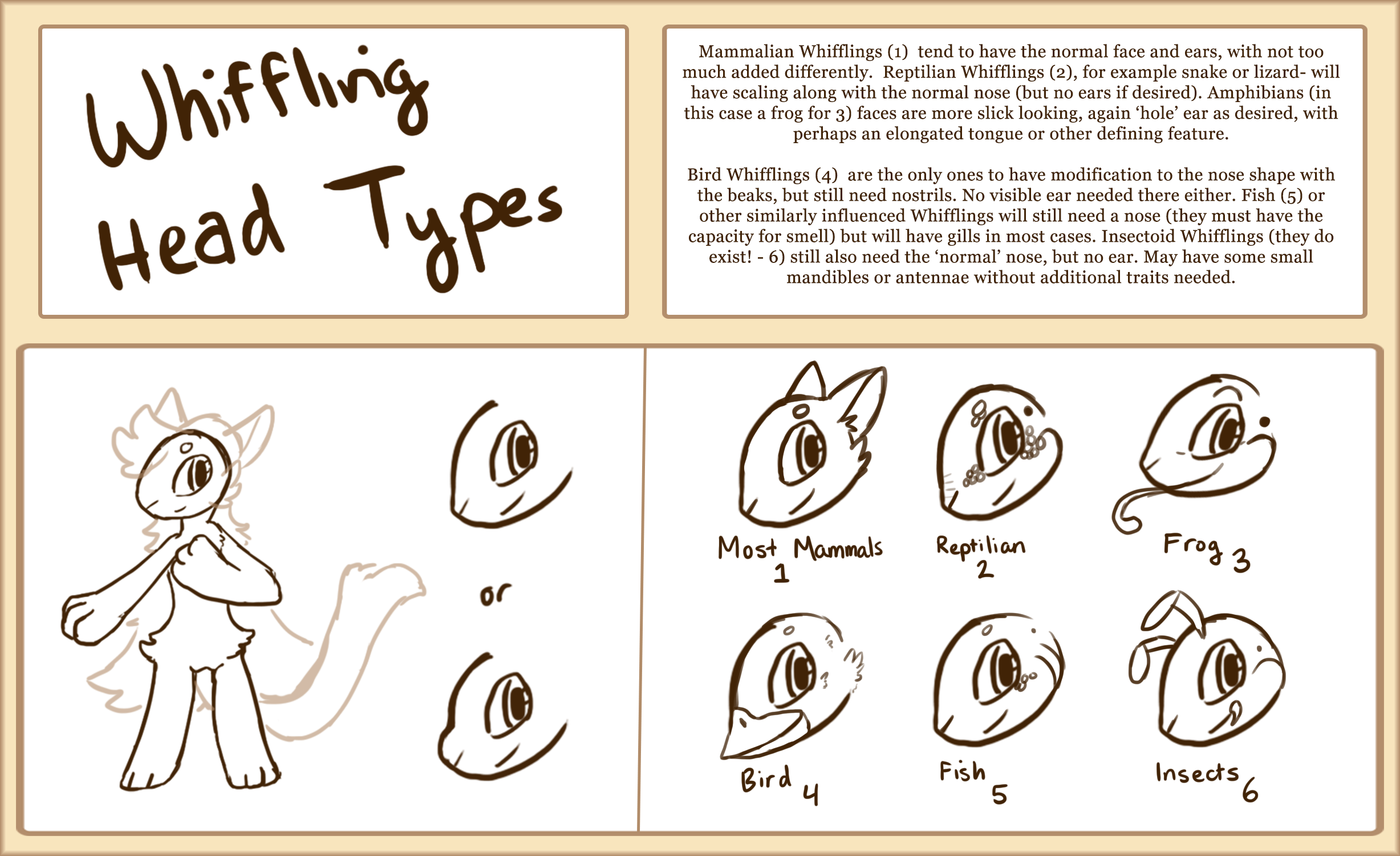 Whifflings can be Normal, Twin, Devilish (Devil), Fae, or Elemental.

Twin trait is a special condition which only happens via breeding or official sales, in which two Whifflings are born sharing a scent.

Devilish and Fae Whifflings are those who have three or more of their respective traits.

Elemental Whifflings have a “condition” of mixing both sides (meaning they have at least three Devilish and three Fae traits).
These statuses mainly affect breeding, but also character lore.

Whifflings love dabbling in Potions to alter their bodies and affect Devilish, Fae, and Elemental statuses. There is, lore wise, thought to be a slight morality component to these traits.

Aside from these, there are also Special Traits, sometimes called “Neutral” traits, which are usually gained by items or potions as well. They do not affect subtype statuses. 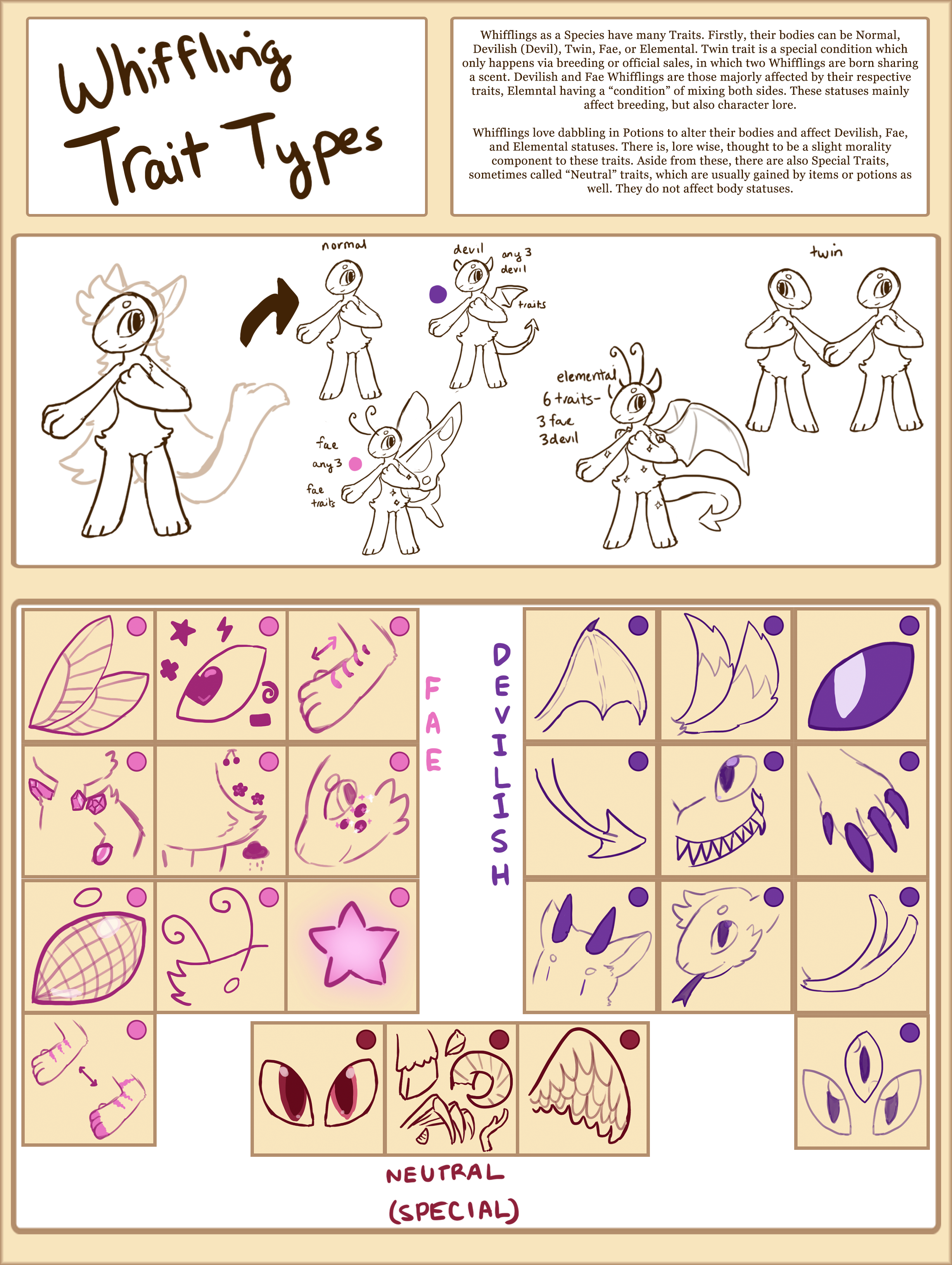