The creature is youthful and curious. From the moment [REDACTED] dropped it off, enthusing about how it will bring great improvement to our lab’s capabilities yet insisting we must guide it towards scientific knowledge rather than “trivial” potential word-focuses, it seems to have taken a liking to me. As a researcher, the possibilities a Tabula Rasa can bring us are endlessly exciting. As an individual, I am excited to have such a creature around. For the most part, the only other life I’ve interacted with has been my coworkers and parents.

The Tabula Rasa behaves as I imagine a child or animal might. It wants to touch everything, see everything, and most importantly, know everything. It constantly asks questions, imitates us during lab work, and reads anything it can get its hands on. I asked the other researchers to bring in any reading material they could; unfortunately, the Tabula Rasa is unimpressed by the plentitude of digital information and desires those old paper books. I find myself taking near-daily trips to libraries near and far to help it gain knowledge. In fact, I’ve been spending a large portion of my salary to enter private libraries and commute farther distances.

I cannot say with certainty why I feel motivated to do so, but I don’t mind having ramen for dinner if my money can be better spent on this Tabula Rasa’s quest for knowledge.

The Tabula Rasa has asked us to call them by the name Aurelia. It will take some getting used to, as we have all been calling them “the Tabula Rasa,” but I think it is good for them to have a proper name.

I do not know how Aurelia picked their name, but I have a suspicion. Last week, the researchers had been chatting about middle names, and mine was revealed to be Aurelia. I have not asked Aurelia (the Tabula Rasa) if this inspired their name choice.

“Speaking” with the Tabula Rasa is unlike normal communication. Aurelia sends her thoughts to us through some kind of telepathy. Us researchers tend to use vocal communication towards Aurelia, though it is not necessary. Purely telepathic communication is unnatural and strange for us to do. Perhaps this type of communication would be a good topic for future study.

Our lab is thriving, as is Aurelia. They seem to have taken ‘Pastel (Color)’ as a word-focus. I am not sure how pleased [REDACTED] will be given that this word-focus is not exactly a technical or scientific word, but it still related to our research here. I can see them beginning to take on characteristics matching this concept, so I do not think their mind can be altered at this point even if [REDACTED] demands it.

Still, Aurelia has been a massive help. Instead of constantly asking us for information, they are now becoming the one we ask (due to their extensive reading). They help in daily laboratory tasks, and they’ve even been put in charge of helping the new hire adjust.

Aurelia seems to have found home with us, and we with them. Everyone seems happier, calmer with Aurelia around. I can no longer imagine the lab without them.

Although Aurelia has continued to help around the lab, they have not been able to access any magical abilities as Paralogos are known for. [REDACTED] seems frustrated with Aurelia’s lack of magical progression, and blames it on my researchers when he visits. It isn’t easy to calm him down – at least not for me, but Aurelia has a real knack for it.

I suppose I can understand his frustration. Obtaining a Paralogos could not have been easy, and the one he got has neither a particularly scientific word-focus nor magical ability. Still, he has to recognize Aurelia’s autonomy. They are a living been of their own. And like I said, they have been incredibly helpful in the lab. We’re about to publish a paper, and I don’t think we would’ve gotten this breakthrough if not for Aurelia.

The lab has been busy. I know I haven’t written in a few months, but I feel this should be recorded.

After reading more about Paralogos online, I realized that the calm we feel in the lab is caused by Aurelia. They actually do have some magic! Knowing this, I am optimistic about their ability to develop further.

Additionally, I have come to think that Aurelia and I share what is called a Bond. If this is true, I worry about what will happen to Aurelia when I am gone. It seems that a broken bond is very harmful to a Paralogos. I can only hope the other members of the lab will continue to support them in my absence.

In an effort to improve the situation, I offered to take Aurelia out of the lab with me this Friday. I found as free public library recently, and though it’s small, I think Aurelia would enjoy being in a true library. Hopefully, it will also make them excited about knowledge once again.

And… I don’t have much time left, so I would like Aurelia to remember the best of me.

Oh how I regret the last entry. Today starts my last week in the lab. [REDACTED] came by to check on the lab during my outing with Aurelia, and he is furious. Apparently, the other researchers told him about Aurelia’s recent state. Between Aurelia’s lack of magic and bond with me, [REDACTED] sees no reason to keep her around. He agreed to let her stay for a while after I leave, but only until her soothing aura has returned. Then, he is going to sell her.

I don’t think the tense environment in the lab will cater much to Aurelia regaining their magic. But I do not know of anything I can do. All I can do is pray.

Please. If there is a God out there, help Aurelia. Don’t worry about me – just let Aurelia be okay after I’m gone… 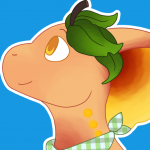 Tabula Rasa (Stage 2) design based on the first design I created for Aurelia, which was more based on the idea of HSV values associated with pastel colors (lights in sets of 3 based on HSV values being higher/lower = bigger/smaller, etc). 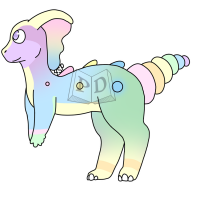 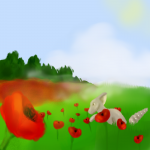 I love this a lot!! amazing story 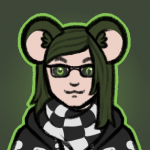 i was nervous about it, so that means a lot! thank you!!