Dawley yawned and rubbed their eyes. The apartment search was not going well, and they had barely gotten any sleep, up all night scrolling through listings. They glanced at the digital clock embedded in the wall. About two hours left, and then they could clock off and go curl up in a ball somewhere.

As students began streaming in, Dawley surveyed the room one last time. They were in a small teaching lab, a sterile room with lab tables in islands and a projector to one side. Each table held a cage of four or so lab mice, scurrying about, grooming each other, and industriously carting scraps of bedding back and forth to make makeshift nests. Dawley leaned down and stared at the mice through the plastic.

“You ready for mouse class?” They asked, to none of the mice in particular. The mice ignored them. “Me neither.”

Dawley took a swig from their omnipresent cup of stale coffee. Technically, food and drink weren’t allowed in the teaching lab, but no one had yet dared to point that out to them. The Animal Research Welfare and Compliance committee always asked them to run the rodent-related courses, and they always agreed, because they did it best, and moreover, they didn’t trust anyone else to do it. Also, the vending machine in the hall of the building sometimes dropped snacks if you hit it just right.

Thankfully, today was just the introductory course - the basics of proper mouse care, handling, and, to top it all off, how to inject a mouse with saline solution. They had done it a hundred times, and so they largely ignored the flood of students, including one nervous-looking graduate student who donned the nitrile gloves and disposable scrubs like the others and sat, fidgeting, in the corner of the lab.

Once the course began, Dawley introduced themself, projecting their voice telepathically to the gathered staff and students. The students always murmured amongst themselves at a Paralogos running the class, unsure of what to make of the diminutive, white-furred little magic dinosaur. Nothing they hadn’t heard before; without too much fanfare, they flipped through the slides on their presentation, playing the videos about laboratory mouse care in quick succession.

Soon, Dawley had reached the hands-on portion of the course, and after a short demonstration on proper mouse handling at the front, they drifted from table to table, advising students as they gently removed the mice from the cages and practiced picking them up.

Suddenly, they heard a commotion from the far bench; the scraping of stools against tile and students gasping in surprise. One of the mice had escaped and was scampering around the table, weaving over notebooks and dodging well-meaning but hesitant attempts to grab it.

Dawley was there in a flash. With a swift motion, they grabbed the escapee by the tail with one hand and the scruff of the neck with the other, immobilizing the errant rodent. Not missing a beat, Dawley gently deposited the mouse back with its cage-mates.

“What happened here?” They snapped, whiskers twitching irately.They trailed off as they took a look at the startled students, some still with half a hold of their mice. One of them, the young graduate student, was pale and shaking. “I’m sorry, I just... I was worried I’d accidentally hurt it and I...” his eyes welled with tears.

Dawley chastised themself internally and took a deep breath. “Hey, it’s okay.” They said, gently. “They have a lot of scruff, you won’t hurt them by accident. Would you like to try again?”

The student stared at some fixed point midway through the benchtop and shook his head.

“Not a problem.” Dawley responded. “How about you take a break out in the hall? I’ll see you in a bit.”

They had barely finished their sentence before the student tore off his scrubs and fled, leaving a class of students now very intently focused on whatever they were doing that wasn’t what had just happened.

Dawley took a few minutes to restart the class, murmuring to their assistants to progress to the next technique. With a last glance to make sure everything was going smoothly, they stepped out into the hall. The student was huddled on a bench outside the door, as far away from the teaching room as possible without fleeing the premises altogether. They sat down on the bench beside the student and offered him a box of tissues. He turned away, and wiped his eyes.

“Are you doing alright?” Dawley asked.

The student sniffed and turned back, his eyes a little puffy. “I guess so.”

“Would you believe me if I told you we have one every class?” They asked.

The student laughed, a little shakily. “Not really. Because that was pretty bad.”

“Trust me, Miguel. You aren’t the first and won’t be the last. Mouse work doesn’t come naturally to everyone. It’s nothing to be ashamed of.”

Miguel put his head in his hands. “It has to come naturally to me. Our RA is leaving, and we don’t have the funding to replace her. Soon, I’m going to have to start doing all the procedures by myself.”

Dawley frowned. “Would you like me to talk to your PI?”

Dawley let a long breath out through their teeth. “Okay, here’s what we’ll do. I can get the deadline for your certification extended. Let me know your schedule, and we can set up a private class. I have some special assistants for folks who need a bit more help. Okay?”

Letting out a shaky breath, Miguel nodded. Dawley scribbled their email on a scrap of paper and handed it to him, and gave him what they hoped was an encouraging thumbs-up before going to rejoin the class.

A few days later, Dawley strode into the teaching lab at the arranged time to find Miguel already there, resting his head on the lab bench and rolling a pencil back and forth. He straightened up when Dawley entered and tossed him a pair of scrubs.

“Let’s get right down to business, eh?” Dawley asked. Miguel nodded hesitantly. “Halsey! C.C.! Come on out and you can meet my friend Miguel,” Dawley said. After a few moments, there was a rustling in their lab coat. Two mice popped out, a black mouse from their sleeve, and a white one from their chest pocket.

Miguel’s eyes widened. “Are those your companions?” He asked.

Dawley nodded as the mice scampered from their arm to the table and began to explore. “Bona fide. They’re smarter than an average mouse. I’d wager they’re smarter than most people, too. They’re made of magic, so you don’t have to worry about hurting them. And best of all, they know how to hold still.”

For the first time, Miguel looked like he was approaching optimism. “What do you say? Can they check you out?” With Miguel’s assent, Dawley nodded at the companions, who scampered across the table to give Miguel a sniff. Soon, they were crawling all over his scrubs, whiskers twitching, poking their heads into his pockets in search of treats.

“It’s not that I don’t like mice,” Miguel said after a moment, picking Halsey up to look into her watery red eyes. “It’s just... I came from a Drosophila lab in undergrad. And compared to flies, mice are just so much more... they’re individuals, I guess. And the thought of experimenting on them... I...” He trailed into silence.

Dawley nodded. “Hey, if you didn’t have empathy, you’d have gone into chemistry, and not biology.” They said. Then, appended, “That was a joke. I know plenty of chemists, they’re all lovely people. Point is, it’s good that you feel for them. You feel the gravity and responsibility of working with living things. It’ll make you a better researcher. I promise.”

“I sure hope so,” Miguel said. With that, they began the lesson.

As Dawley had promised, Halsey and C.C. were obliging assistants. Halsey held still while Miguel practiced the mouse hold, picking her up by the scruff of her neck securely with his thumb and forefingers so that his other hand remained free. All she did was let out a squeak if his grip was too tight, or tap him on the wrist with her tail if it was too loose. As the lesson progressed, Halsey and C.C. took turns, and whichever companion was “off-duty” got to snack on some dry pasta from Dawley’s pocket.

After some trial and error, Miguel was able to grasp the mice fluidly. He looked to Dawley after the best, latest attempt, eyes brighter than the Paralogos had yet seen them.

“Great work!” Dawley said. “I think you’re ready to try the real thing. They’re a bit wigglier, as you know.”

“... But how about we take a break first?” Dawley finished.

A few minutes later, they were by the vending machine in the hall. Glancing back and forth covertly, Dawley let Halsey and C.C. onto the floor nearby. They scampered behind the machine, only to emerge a few moments later inside of it. Climbing across the shelves, the mice began to knock bags of chips and candy bars down into the slot. “Want one?” Dawley asked. Miguel shook his head, bemused. “Suit yourself,” Dawley said, ripping open a bag of chips and polishing it off in seconds. They sat together on the bench as Dawley made their way through their pile of ill-gotten gains.

“Can you talk to them?” Miguel asked, after a period of silence. “The mice, I mean. Or maybe just rats? What do they say?”

Dawley shook their head. “I can’t. But I can identify a strain just by looking at it. Halsey there, she’s a BALB/c mouse. BALB, for Bagg albino. The facility has hundreds of strains, and I’ve saved a disaster or two in my time when they’ve gotten mixed up by accident.”

“Huh,” Miguel said. “What made you choose that one? I mean!” He backpedalled. “Sorry if it’s rude to ask! I just... we have my cat at home, and I’d do anything to be able to talk with her.”

Dawley chewed on a chocolate bar and stared across the hall. “It’s fine, I don’t mind. I tried, for a time, you know. Early on. But the magic just had other ideas. Maybe it knew what I really wanted.” They sighed and  looked at Halsey, who had curled up in one hand. “I think it’s better this way... It makes things easier. We make their lives as comfortable as we can. We have a lot of their needs worked down to a science. But Halsey and C.C. aside, they aren’t pets. Not by a long shot.”

Dawley leaned back against the wall and chuckled lightly. “I’ve never told anyone that before,” they admitted. “But then again, no one’s ever asked.”

Miguel was picking up Dawley’s errant snack wrappers, crumpling them and trying to make baskets in the trash bin across the hall. Suddenly, he paused, mid-throw, letting his arm drop. “You’re like me,” he realized.

Dawley looked away, quiet for a long moment. “That’s how I know that you can do it,” they said. “If I learned to handle mice, so can you. If you want to. If you have to.”

Miguel took the shot for the last crumpled candy wrapper, which bounced off the rim of the trash can before falling in. They sat together in silence, the snacks long since finished. 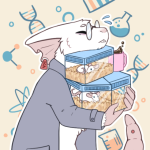 Public Opinion in which Dawley makes a friend

They're a bit of an ass but they tend to be gentle and quite helpful to others where mice are concerned, provided the other party's goodwill is apparent. They don't feel a particular way about humans and view them equally as colleagues, coworkers, etc, though they tend to form stronger relationships with other Logos 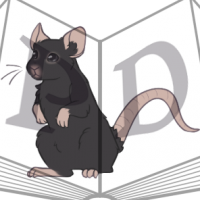 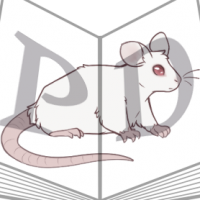 In the rich text editor:
[thumb=187]
In a comment:
[Mouse Class by Shrike (Literature)](https://www.worldoflingua.com/gallery/view/187)
There are no comments yet.