Some say that managing pets are easy, just got to take care of them. By feeding them, bathing them, giving them water and making sure they are healthy and happy. It's as easy as that... That is if they suddenly didn't get anything extra to deal with. Maybe even like a random magical ability that just popped up out of nowhere! Leading you to maybe have to chase after them or getting them out of the way and away from strangers with knives. That ends up with you panting and chasing and pulling them away from a lot.

If Varna wasn't running everywhere, they were flying there and man, they were exhausted. Even their wings lost their shimmer as they tried to rest every time they stopped. But, it didn't take long for them to need to get up and bolt after their little pet. The pet in question is a small green and black swallowtail butterfly, which being that meant two things: One, they blend in easy to most green things they land on and Two, they were tiny and could hide or not be seen right away. Which that was an issue alone but not a bad one per say. At least, not until now. Now, or well recently until now it seemed that their little pet managed to obtain magic! Which is nice and all. It's wonderful actually. But Varna wasn't too happy due to the fact that their pet wanted to use its magic on EVERYTHING. Which if it was any magic that wasn't you know HEALING PARSLEY. It would've maybe, kinda, been fine?

Now Varna was just chasing that little butterfly everywhere, under plants, in store, and in people's houses as they cut the parsley they were using. Those people seemed to be the most upset, especially the ones that just finished up chopping and this tiny bugger casually flies in and undoes all your hard work. While sure those were bad, the ones that their pet bothers mid chopping is the worst! They keep thinking that their little baby will be chopped, they are just so tiny! Plus not many of these humans notice them at all. After each of those encounters, Varna just swears they'll have a heart attack soon. Mostly guessing because when they have the small chance to rest after, they can feel their heart pounding like crazy. They hoped they wouldn't but the chasing wasn't helping either. When would their little pet get tired!?! Hopefully soon so they could scold them...

While the chopping situations had chopped their nerves to pieces, the ones that annoyed them where the store ones. Each store always had these bags of fresh parsley which had these breathing or air holes. As to keep it fresh and nice so it can last longer. Well, they both found out that it seemed Varna's little pet could squeeze in them. Unfortunately.... While this was better than the chopping situations, it just wasn't fun trying to pull their little pet out. Especially when people shopping would only see them. A parsley whiffling seeming to trying to pull parsley out of parsley bag holes.... Then having to panic explain everything and not get thrown out without their pet was the worst..... While they could feel the connection between them and their pet.. What if someone buys the package and needs to rush home? What if someone grabs it hard and crushes them?! What if their little baby stays in there for days never to come out again and hates them?!?!?! Varna could only panic and almost began to weep every time. Until that is when the one who kicked them out usually interrupted them as it seemed most stores had a personal whiffling that helps them or the people have a bonded whiffling. As they usually came out with another whiffing who had their little pet. They'd apologize and so would Varna, theirs was that they usually didn't believe that there was a pet and Varna's was about the said pet getting everywhere.

While Varna felt like locking this cute little guy up until they didn't go into dangerous situations, Varna was quite happy to see their little pet being so happy. It took until the day's end when their pet crashed finally. Even though Varna was also just so tired that their feet dragged and their wings could barely keep them up, they just chuckled as they saw their tired little pet and then picking them up and holding them. They couldn't be mad. It was an exciting new discovery and their little guy just wanted to show off and use this new thing they got. Which was fair to Varna. Even if it led them to chase the little pet everywhere and cause them to be scared. It happens. They chose to rest for a while before slowly flying home, tucking their bud into bed and then passing out on their own bed. 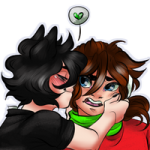 In the rich text editor:
[thumb=1700]
In a comment:
[Chasing Butterflies - Pet Magic by PromptoBeans (Literature)](https://www.worldoflingua.com/gallery/view/1700)
There are no comments yet.