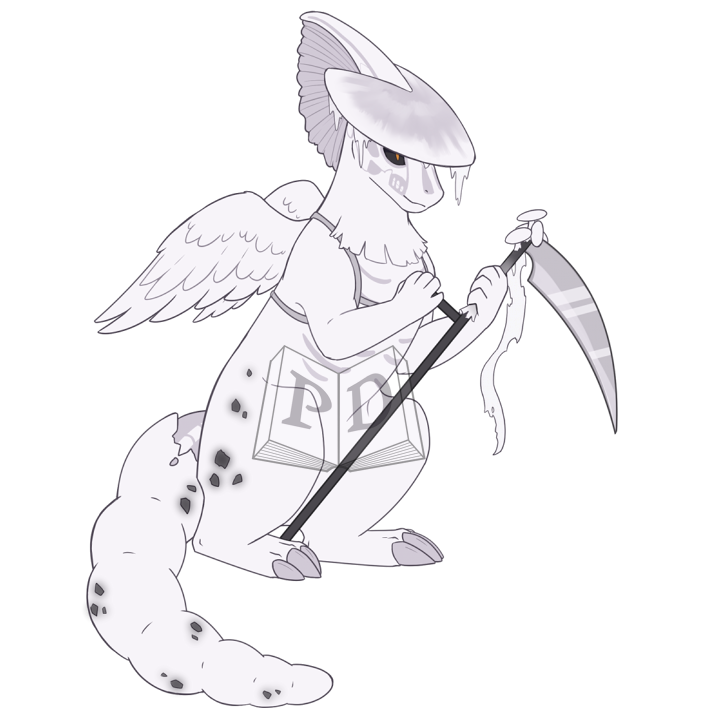 Angel: "One of a class of spiritual beings, attendants and messengers of God," a c. 1300 fusion of Old English engel (with hard -g-) and Old French angele. Both are from Late Latin angelus, from Greek angelos, literally "messenger, envoy, one that announces," in the New Testament "divine messenger," which is possibly related to angaros "mounted courier," both from an unknown Oriental word (Watkins compares Sanskrit ajira- "swift;" Klein suggests Semitic sources). Used in Scriptural translations for Hebrew mal'akh (yehowah) "messenger (of Jehovah)," from base l-'-k "to send." An Old English word for it was aerendgast, literally "errand-spirit."

Definition:
The name destroying angel applies to several similar, closely related species of deadly all-white mushrooms in the genus Amanita. They are Amanita bisporigera and A. ocreata in eastern and western North America, and A. virosa in Europe.

Destroying angels are characterized by having a white stalk and gills. The cap can be pure white, or white at the edge and yellowish, pinkish, or tan at the center. It has a partial veil, or ring (annulus) circling the upper stalk, and the gills are "free", not attached to the stalk. Perhaps the most telltale of the features is the presence of a volva, or universal veil, so called because it is a membrane that encapsulates the entire mushroom, rather like an egg, when it is very young. It is often confused with many edible species.

The destroying angel (Amanita bisporigera) and the death cap (Amanita phalloides) account for the overwhelming majority of deaths due to mushroom poisoning. The toxin responsible for this is amatoxin, which inhibits RNA polymerase II and III. Symptoms do not appear for 5 to 24 hours, by which time the toxins may already be absorbed and the damage (destruction of liver and kidney tissues) is irreversible. As little as half a mushroom cap can be fatal if the victim is not treated quickly enough.