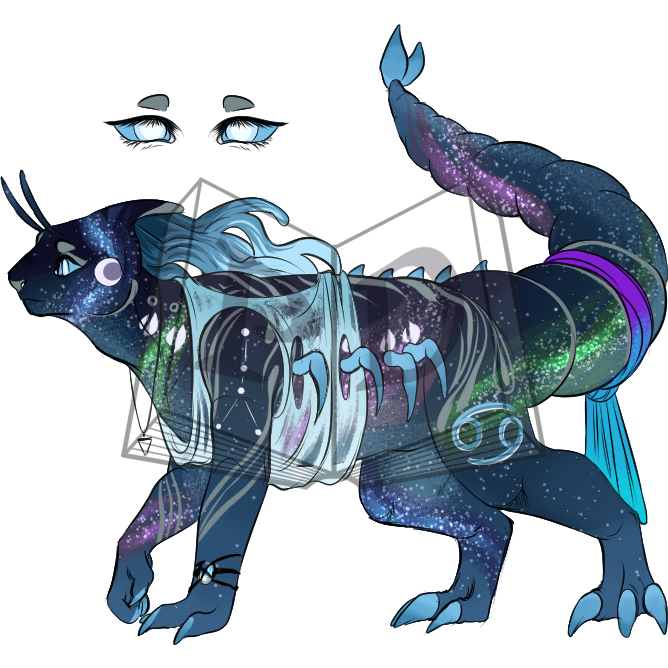 This Paralogos has received a second Snapshot
Replaced Art

Old English cancer "spreading sore, malignant tumor" (also canceradl), from Latin cancer "a crab," later, "malignant tumor," from Greek karkinos, which, like the Modern English word, has three meanings: a crab, a tumor, and the zodiac constellation represented by a crab, from PIE *karkro-, reduplicated form of root *kar- "hard."

Greek physicians Hippocrates and Galen, among others, noted similarity of crabs to some tumors with swollen veins. The Old English word was displaced by French-influenced doublet canker but was reintroduced in the modern medical sense c. 1600. In reference to the zodiac sign from late Old English; meaning "person born under the zodiac sign of Cancer" is from 1894. The sun being in Cancer at the summer solstice, the constellation had association in Latin writers with the south and with summer heat. Cancer stick "cigarette" is from 1959.

Definition:
The sign of Cancer belongs to the element of Water, just like Scorpio and Pisces.
Guided by emotion and their heart, they could have a hard time blending into the world around them.
Being ruled by the Moon, phases of the lunar cycle deepen their internal mysteries and create fleeting emotional patterns that are beyond their control.
The symbol of Cancer relates to the Crab Constellation named Cancer - Latin for crab.

Magic Status: 1 - Neophyte
Tier 1 - Can slightly pull water towards them, like the tide.